Remember last week when I taught my first community class to a team of Squirrel Children? I taught there again today, but with the noticeable absence of Squirrels.

Only one kid from last week returned. And she brought a friend.

I could chalk this up to my own personal failure as a teacher, but instead I'm relishing in the fact that this girl felt the benefits of yoga enough to come back! Perhaps the other kids had other things to do today. Or maybe because the class now starts 15 minutes later, the three kids who had to leave early last time decided it wasn't worth it to go to yoga for a whopping fifteen minutes. Whatever the reason, it's NOT about me. 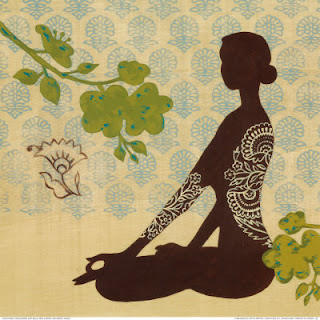 After attending a lecture last weekend on Yogic Philosophy,  I'm focusing my energy this week on Letting Go. Attachment to things and ideas will only impede me on the path toward Enlightenment.

The weather today was GORGEOUS. Clear blue skies and about 75 degrees. I pulled up to the middle school feeling bummed that I had to spend the next hour indoors, when I realized that I had the power to bring the class outside! So my three students grabbed mats and we walked to a grassy spot far from buildings and the parking lot. (Yes, THREE students - two kids and one mellow Boys & Girls Club facilitator).

In turns out that doing yoga on the grass is kinda lumpy, so I cut out all the balancing postures. The students were considerably less squirrely than last week and I was more grounded as a teacher. I really felt like I brought more of myself into my teaching than last time! After the girls complained that their arms were killing them because I MADE them do 4 push-ups (aka chatarangas) on the same day they had to run for PE, I switched gears to a more mellow yoga class.

I could tell that yoga had worked it's relaxation magic on the students because on the walk back to the building they were quiet and looked a little dazed.